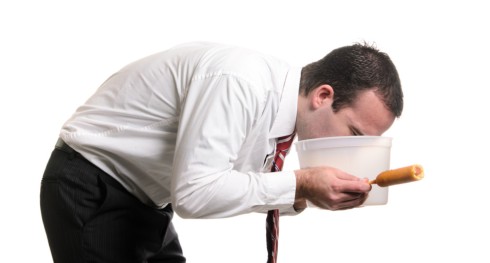 You know.. I’ve only had maybe 2 cases of food poisoning in my life but they were such brief and generally only mildly unpleasant experiences, that I can barely remember which places did it to me…. oh yeah, it was the creamed spinach at Boston Market and bad avocado at Subway.  Wow, I guess that wasn’t so hard.  So proud of me!

But yesterday?  Yesterday was so terribad that I was nearly in tears from the pain.

My husband and I decided to have our anniversary dinner at the very place where I was going to ask him to be my boyfriend back when were still dating; Tantalum.  Cute, right?  Yeah, I thought so too.  Can we say “score some brownie points“?  For appetizers we had fried brie and a half dozen oysters (1st red flag) and for dinner, I had the seared yellow fin tuna over cilantro rice (2nd red flag).  I’ve actually had that meal several times before and it’s my absolute favorite when I go to this restaurant.  This time, though?  It tasted different.  Heck, it even looked different. 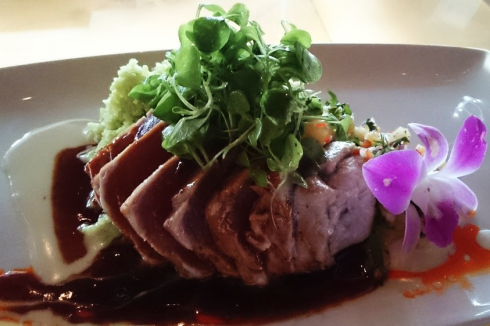 Usually, it’s had a nice crusted sear on the outside and the inside has a healthy dark magenta hue to it, which most yellow fin tuna should have I think.  Additionally, when I’ve bit into it before, the tuna offered very little resistance and it was just moist and full of flavor.  This time however, it had a an almost dark brown or maroon color and the texture seemed real off to me.  I didn’t think much on it though because even though it tasted and felt differently than my previous experiences, it was still a good tasting dish.  It was my anniversary; I didn’t want to ruin the evening with my standard paranoia.

This time, I think I should’ve paid attention.

On the UBER ride home, I noticed I was starting to sweat and my heartbeat got really irregular.  I also had the most difficult time breathing much less sitting upright.  It wasn’t long after we got home that I found myself racing to the bathroom repeatedly to praise the porcelain gods.  Without getting too graphic, let’s just say I recognized what came back up.  I spent the rest of the night on my bathroom floor with a bottled water in one hand and towel in the other… you know… for clean up.

I need to learn to trust my own culinary instincts.  I’ve eaten at enough places, literally all over the nation, to know better than to not listen to what my palate is telling me.  It’s a shame because this was one of my favorite restaurants.  Not to say that I wouldn’t go back, but I think I’d think twice about it from now on.

Also?  That tuna is officially stricken from my list of dishes.  #ByeFishyFelicia

As I sit here basking in the bittersweet hangover of Independence Day, all I can think of is food, food, food!  A sunny-side-up egg, a piece of bacon, ANYTHING to absorb the delicious poisons I ingested last night.  Enter: Krispy Kreme and their mouth-watering 78th birthday celebration offer followed by the sobering realization that the 10th is still 5 days away….. DAMNIT!!! 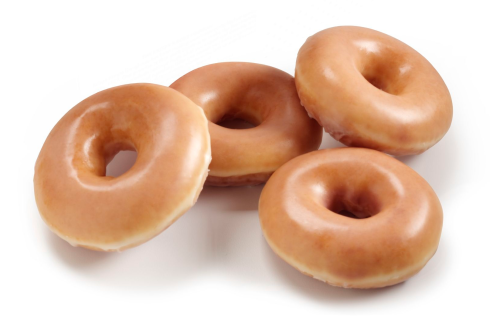 Somewhere over the rainbow, past the bog of eternal stench, situated just past the second star to the right and straight on till the hangover ends lives the most rare sub species of the gay community: the gay gamer. In recent times, we’ve come to be known as simply “Gaymers”.

We are the outcasts’ outcasts’ OUTCASTS!!! And before you ask, why yes, the extra exclamation points are beyond necessary. They really drive the point home I think. It’s always the toughest box to climb out of because every last person I run into has about a hundred and one, pre-conceived notions about who I am, where I come from, and how is it with as much time I spend sitting in a chair and gaming my life away, do I manage to make sure my tummy doesn’t stick past my belt. Simple really. I mix a healthy and moderate dose of gaming with exercise, a high protein-low carb diet, and every conceivable fat burning pill the FDA has yet to catch…. wait… where’d I go?

At any rate, I’ve spent most of my life silently hiding the “less appealing” parts of my gaymer personality in lieu of more acceptable personality traits. Because let’s face it: I was trying to get some.  At some point, I had decided to be unapologetically me and let the world bask in my ambiance. I hear my ambiance is nice to be around; or so the voices in my head keep telling me. I had no real idea why I decided to effectively “come out” again other than the mere fact that I have entirely too much free time on my hands and about a million and one thoughts spilling out of my brain. It’s gotta go somewhere. Since the information superhighway has more off-ramps than you can shake a disco stick at, it’s going there.  And by there, I mean, my blog.

I feel kind of bad that I’ve neglected this for nearly 2 months.  I’ve just been busy.  Better yet, I’m going to use Eddie Izzard‘s excuse circa Dressed to Kill era: “I was dead at the time!  I was on the moon!  With Steve!”….No?  Not feeling that?  OK, maybe that wasn’t very funny to you but trust me when I say you HAD to be there.

So long story short (too late), I’m jumping back on my gaymer horse.  Hopefully I’ll have more stuff to talk about that manages to promote some semblance of intelligent discourse on the serious business of Video Games.  I also love foodie stuff, but I tend to save that for my Instagram account it seems…

… damnit, I just looked at my pictures and am furiously craving chicken wings.  I must be off.  My appetite needs me! 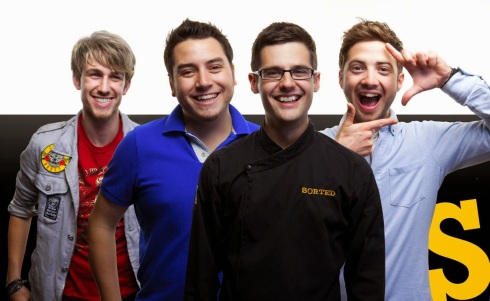 I have been meaning to write up a blog entry about what is literally my FAVORITE YouTube channel and I’m saddened by the mere fact that it took roughly 3 weeks of my blog’s existence before I did.  Talk about procrastination!

Interestingly enough, the day I decide to finally put up a Foodie Post (being that I am a self-described renegade-foodie) the boys from Sorted Food went and incorporated the Super Mario Bros into one of their recipes?

As delicious as I’m sure that was, I don’t think I’l be trying it any time soon as it just looks like one big carb-bomb.  I felt my insides puff up just watching them take a bite out of that… that… whatever THAT was.

I really enjoy every last recipe that Sorted pumps out because the guys create these amazing and mouth-watering dishes that I would expect to be churned out in restaurants, and present it to you in the most simple-to-follow and basic format possible.  Anyone can be an arguably good chef with the tips and tricks they bring to you.  For someone like me who already fantasizes about one day winning MasterChef, it’s like having your cake and eating it too.. which BTW, they make great cake recipes too…. in a freaking MUG of all things!

Mike, Jamie, Ben & Barry (from left to right, up top) make the interwebs a little brighter, every time they upload a new video.  I highly recommended checking them out and subscribing to all their social-media venues.  They’re also pretty easy on the eyes, but that’s another blog entry that needs to happen.

Before I go off on some random tangent about handsome chefs, I’m going to just finish off with sharing my FAVORITE dish I’ve ever learned from them.  I cook this (or a version of it) at least once a week because it’s such a time saver for someone with my schedule: Chicken Fricassee…