And by “coolest”, I mean in the most literal sense of the word.

In a startling (albeit welcome) move by Marvel Comics, one of the founding members of the X-Men just came out as gay!  Our very own Iceman (aka Bobby Drake) just got dragged out of the closet by the X-Men’s resident redhead, Jean Grey! 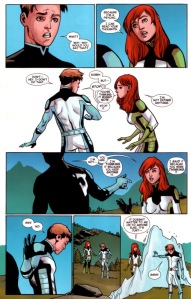 I couldn’t be more floored by this turn of events for many, many, MANY reasons; not the least of which involves a breakdown in continuity for established X-Lore.  For those that have not been following one of the newest X-Books, “All-New X-Men“, after the fallout of the Phoenix 5 and Cyclops literally murdering his surrogate father, Professor X, Beast plucked the original 5 X-Men from the past and brought them to the present.  How he did this without rupturing the space-time continuum is beyond me.  Did he not watch Back to the Future?  Next thing you know, he’s going to send his younger self a Sports Almanac.

Given that these five youngsters have yet to fulfill their destinies as X-Men so that their present day selves will exist as the people they are today, I’m not entirely sure how the X-Scribes are going to pull out of this one.  The fact remains, that the original X-Men DO still need to go back to their time and have their memories wiped of their experiences so as not to alter the time stream or else the ramifications could be catastrophic.  We know this to be true given that in the pages of the recent “Battle of the Atom” story line, young Cyclops was killed (momentarily, of course) and when that happened, older Cyclops faded out of existence for a smidge.

Again, I’m not against Bobby being Gay, CLEARLY; but this news just broke my mind and now my memories of the popsicle’s adventures are all wonky and pear-shaped.  How this affects the known X-Men universe can only unfold in time but I for one, cannot wait to see it.

On a side note?  Can we re-do the X-Movies and have Shawn Ashmore (as Iceman), totally make out with Daniel Cudmore (Colossus) or something?  That would either be the HOTTEST thing ever (no pun intended) or potentially akin to licking a frozen metal pole…. that was almost naughty fan-fic wasn’t it? 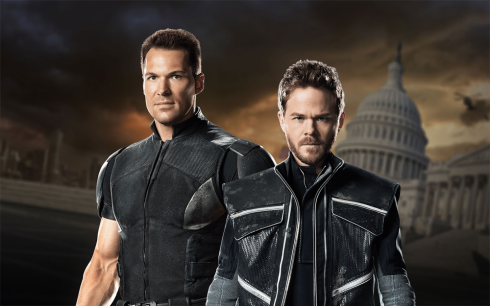 This entry was posted on Tuesday, April 21st, 2015 at 3:57 pm and tagged with Colossus, Iceman, Marvel, X-Men and posted in Comic. You can follow any responses to this entry through the RSS 2.0 feed.
« Avengers : Dark Ages
I NEED DIS »